"GRIEVE NOT LONG THAT HE'S GONE...

BUT REJOICE FOREVER THAT HE WAS!" 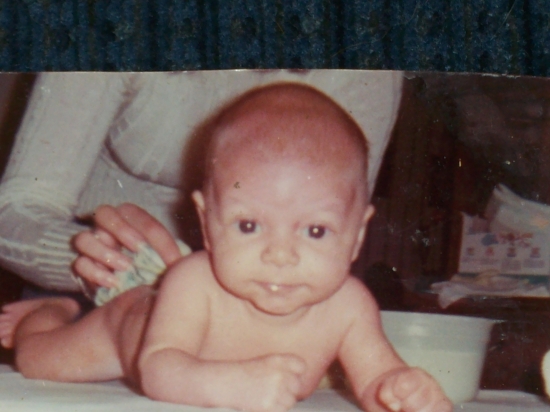 born to us, Ronni and Vinnie Tamburello on September 12, 1975. He was born on his mother's birthday in Charlestown, a suburb of Boston Massachusetts. We were very young when Vinnie was born, but grew in maturity with the bond of parenthood. We were very proud of Vinnie.  He was my first born, my namesake and we had high hopes for him.

He was brought up in Charlestown and though there was little money for us Vinnie always came first. We tried to make sure that on his birthdays and Christmas' he never went without. He went to St. Catherine's School in Charlestown. Forced Busing was in full effect but we would not allow him to be bused. We did what we could to insure that  he would one day be able to live a good life. As any parent would want for their chidren.

In 1980, when he was 5 his brother Chris was born. He really cared for Chris. Watching over him and showing a protective nature beyond his years.  When he had something he would share with his younger brother.  When Chris would cry he would share his favorite toy monkey with him. And that was big because that monkey went everywhere with him. He loved it so much that one day we decided to get him a new one exactly like the other one. But Vinnie became so upset that I had to climb in the dumpster and search around in all that garbage until I found it! That was Vinnie, determined even at that young age.

In 1984 Jason was born and again was a big brother to him. When Chris would not share or play with Jason Vinnie was there to do it. He loved them both so much. I can't remember Vinnie not being with them when they were younger. We were so happy. We had 3 great boys who were the pride and joys of our lives.

Then in 1987 our daughter Vanessa was born. Vinnie absolutely loved Vanessa. No matter what he would always help her and dote on her.  Even going against his brothers when necessary. One time when I was scolding Vanessa Vinnie got really mad at me and scolded me saying "Dad, she's just a baby she don't know yet!" Well, I can tell you he taught me a thing or two.

He was always known as "Li'l Vinnie", no matter if he towered over me, which he did, he always was, and still is, known as Li'l Vinnie. But as big as Vinnie was, and as fearless as he tried to be, there were moments that showed differently. Such as the time we were on a log ride at the amusement park. Everything was great as long as we were floating close to the ground, but when Vinnie saw the hill we were about to go up, his eyes grew wide and he jumped right out of the ride while it was going! Preferring to meet us at the end. That was Li'l Vinnie.

Vinnie loved to skateboard as a teenager. He was really good at it, too. He would spend all day on that skateboard. Then, one day his skateboarding days ended. He broke his leg in 2 places. He never skated again. Then he switched over to playing basketball. That became his favorite pastime. Playing it and watching it. He was involved in a lot of programs that helped the kids of Charlestown of the streets and into the courts. He coached a lot of young people to get them interested in other things besides the streets.

Vinnie also loved to play tennis. He learned about tennis with the Charlestown CHAD program. He would teach and mentor younger kids on tennis when he learned enough about the game. He would spend hours on the courts. When he wasn't teaching tennis he was playing it.

I used to be a coach for T-Ball and Vinnie would love to come down to the field and help me with the children. He had a knack with the kids. He loved to work with them out on the field and the kids really loved Vinnie. He understood them and they understood him. He could relate to the children in a way that I couldn't. He was Coach Vinnie.

At 17 he decided he wanted to go out on his own. Determined to prove his independence. He had many ups and downs, sometimes more downs, but to his credit he never gave up. Still, he always kept in touch with his mother. He loved her very much and she him. They had a special bond. She had a 6th sense when it came to Vinnie. So much so that at any given moment Ronni could sense when he was in trouble, though we hadn't heard from him for a while.

For many years Vinnie had a really hard life, away from his family. Still, he never gave up. He was very independent, determined to make it on his own. But, if Vinnie ever really needed us we were always there for him.  And we were on many occasions. Vinnie once told me that one of the things he regretted about those lost years was the time he missed away from his brothers and sister. He knew he couldn't get that time back so he tried to make the best of the times he had when he was around them.

Then in 2000 Vinnie came home to live with us. He worked with me, learning the telecommunications trade. He worked hard and liked what he was doing. We took Vinnie and all the kids on a cruise to Bermuda. He always said that was one of the best times of his life. For the next several years Vinnie did well, had his own place, was working hard. Then in 2006 he ran across a very hard patch in his life and moved back in with us until he got back on his feet. He continued working with me and learning. Then in 2007, he went to Vermont to work with Chris restoring houses. He would purchase fixer upper houses, fix them and then sell them again.

While up there he met Julie Kronberg. He cared for Julie a lot and she for him from what we could see. They were always together. Then Julie broke the news that she was pregnant. I've never seen Vinnie so excited! They seemed genuinely happy about raising a family and made plans to marry. But, unfortunately, her mother did not share her happiness. After an argument she threw Julie out of her house. We could not leave her on the street so we took her in.

Everything seemed to be going fine. Then Julie got really sick and wanted to go home for the weekend. A few days later Vinnie got the bad news; Julie had a miscarriage and lost the baby. He was devastated! The one positive thing that Vinnie had in his life was gone in an instant! He became very depressed.

Julie came back a few days later and they tried to continue on with their lives. He was doing good. He was  looking forward to life again. He then made the decision to make it on his own. He and Julie were going to be married in May of 2009 and he wanted to provide for them. He decided to move to Vermont to start life anew. Little did he know that it would ultimately lead to the end.

He was back with us for just 2 short years. Not enough time. We still had so much to experience together as a family. We were just getting to know him again when he was taken away from us forever...